Multiple Sclerosis (MS) is a progressive neurological disorder that affects 1 in every 385 Canadians. In fact, Canada has one of the highest rates of MS in the world. Based on the 2014-2015 data reported by the Canadian Chronic Disease Surveillance System, it is estimated that over 77,000 Canadian adults are living with MS. MS can occur at any age but is usually diagnosed between the ages of 20 and 49.

MS is classified as an autoimmune disease. It occurs when a person’s own immune system attacks the myelin sheath, the protective tissue that wraps around the neurons in the brain and spinal cord. The myelin sheath is necessary for conducting signals between nerve fibres. When it is damaged from MS, the communication between nerve cells is disrupted, and the body does not receive the instructions from the brain to perform basic functions. This results in a deterioration of function over time. 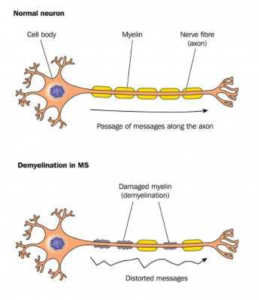 MS affects everyone differently, including the symptoms they experience, the severity of those symptoms, and the progression of the disease. Some of the common symptoms include:

There are several types of MS that follow different patterns:

Clinically-Isolated Syndrome (CIS)– A single episode of neurological symptoms that may suggest MS.

Relapse Remitting Multiple Sclerosis (RRMS)– Unpredictable relapses where new symptoms increase or worsen followed by periods of remission where symptoms improve to some degree. This is the most common type of MS.

Secondary-Progressive Multiple Sclerosis (SPMS)– Many people with RRMS will later develop SPMS, where the disability will steadily progress over time without periods of remission.

While there is no cure yet for MS, there are several treatment options and therapies that focus on improving function, managing symptoms, and preventing future attacks. In addition, research continues in order to learn more about the cause of this disease and how to prevent it.